How to sell a retirement property 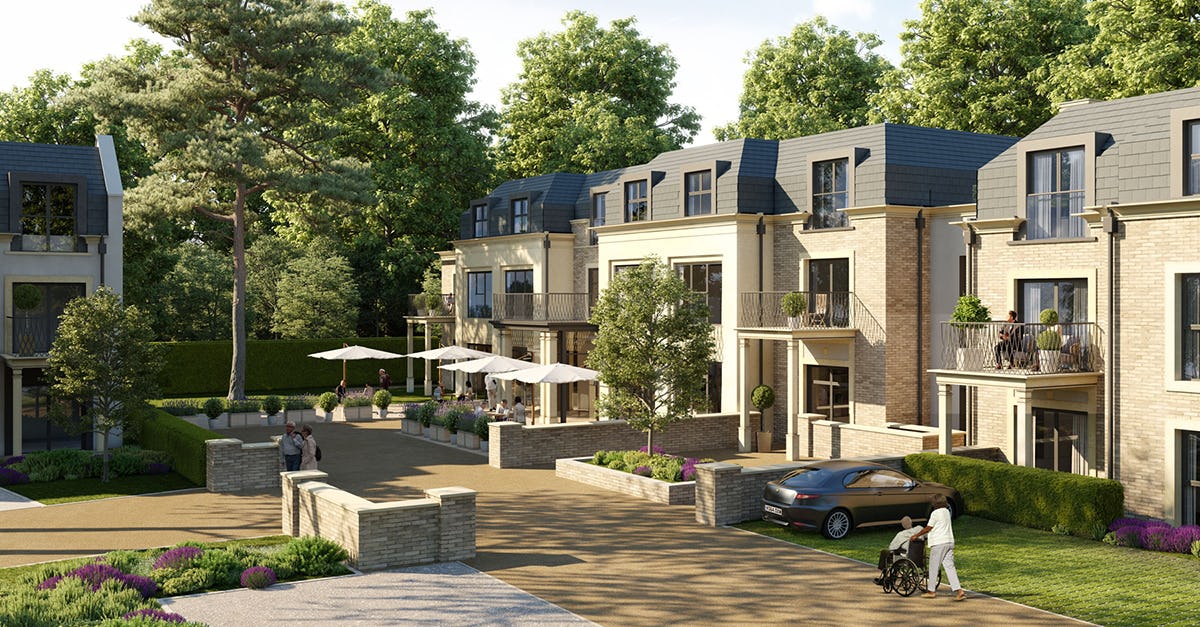 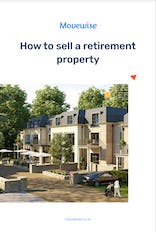 How to sell a retirement property

This guide discusses all you need to know about retirement homes and the best strategy for selling them.

The population of the UK is living longer: one in five people is aged over 65, and this figure is forecast to reach one in four within the next 20 years. However, retirement properties make up just 3% of the total housing stock: some 750,000 units. The majority of these are sheltered rental properties, but about a quarter are sold leasehold, while a small but growing proportion are shared ownership.

The leasehold market is dominated by large developers. The best known is McCarthy Stone (previously McCarthy & Stone), which has built 58,000 properties at 1,300 sites since 1977; other major players include Audley Villages, which has built more than 2,000 properties across 20 developments, and Retirement Villages Group, which recently announced plans to spend £2bn building 5,000 new retirement homes across 40 sites by 2031. Legal & General plans to spend a similar sum on building 3,000 city-centre retirement homes through its Guild Living venture over the next few years.

According to a report published in 2020 by the estate agency Knight Frank, about 9,000 retirement homes are built each year, and this rate is likely to increase, meaning that the overall supply of retirement homes is expected to grow by about 71,000, or almost 10%, over the next five years.

However, even that increase is not enough to keep pace with the ageing population. It might be expected, therefore, that with demand exceeding supply, retirement property would be a good investment, but in reality that is often not the case. In recent years there has been growing concern over the resale value of retirement homes. The average length of ownership of these properties is seven to eight years: a period during which property prices would normally be expected to increase significantly. By contrast, sellers of retirement homes often find that they cannot find a buyer without a hefty price cut – or, in some cases, at all.

The average new-build retirement home falls 2.6% in value for each year of ownership.

A report by The Times in 2019 claimed that 80% of leasehold retirement homes built between 2001 and 2015 had lost value, with an average reduction of almost £39,000. Research by Movewise found similar results: of a representative sample of properties first sold between 2001 and 2016, and resold between 2017 and 2020, more than 80% lost value, and the average retirement home fell 2.6% in value for each year of ownership.

One specialist agent specialising in retirement property told Movewise that they generally expect a new-build retirement flat from a leading developer to lose 30%, or £100,000, in value by the time it is resold for the first time. One-bedroom retirement flats are especially hard to sell. 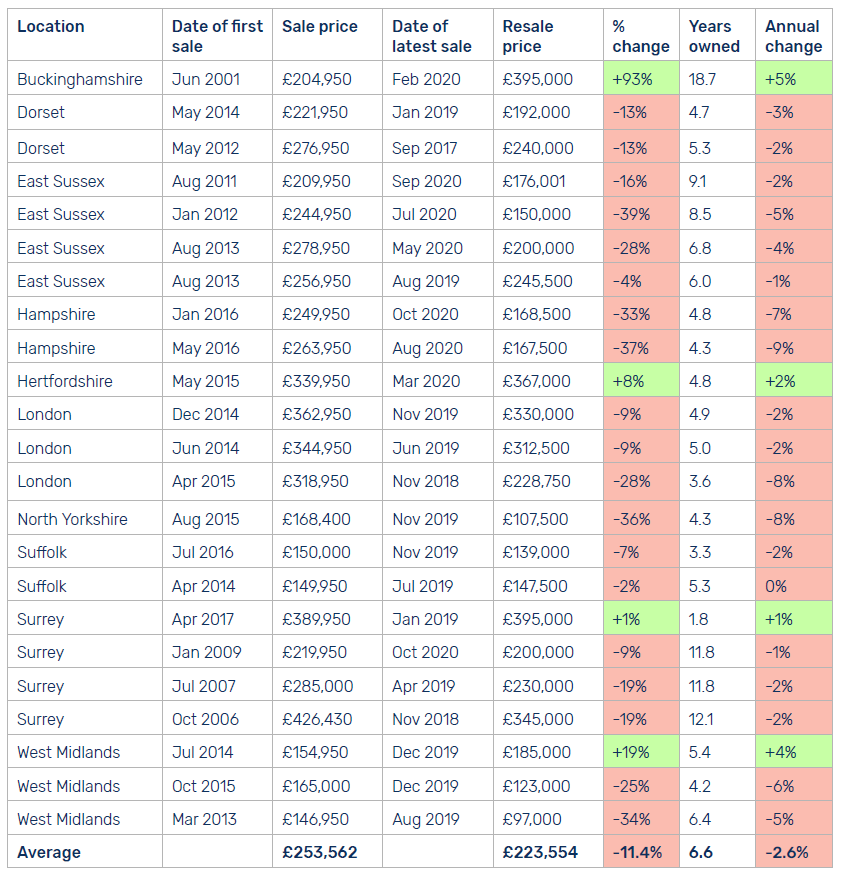 Why the fall in value?

If the nation’s population is getting older, why are retirement properties hard to resell without losing money? There are several factors:

The Covid-19 pandemic made the market even tougher, as many older people were shielding at home and reluctant to view property.

“Retirement homes have always been hard to sell, but in the last year, they have been particularly difficult, if not impossible,” says one agent in Greater London [speaking in spring 2021]. She believes the market has become “massively oversaturated” with both new-build homes and resale properties.

“We sold some new-builds three years ago and there was much more demand back then. Two of those are back on the market now and have had absolutely no interest – they’ve been listed since last year and only had one viewing each.”

Shared ownership also puts buyers off immediately, the agent says. “The freeholder of the building often owns a 15% share in the property. This means that the freeholder has to agree to the valuation figure, and they always get their own valuation done too – which overvalues the property and forces it onto the market at a higher price, so it doesn't sell.”

The agent also highlights another issue that is unique to retirement homes: “Families who want to put their elderly relatives into them, quite often are forcing them to move, but the relative is reluctant. This makes sales all the more difficult and slow.”

A problem for families

By their nature, retirement properties often end up being inherited by the families of those who owned them, but are unlikely to be suitable to be used by them. They are therefore left with the task of selling a home which may represent a significant portion of their inheritance. Knowing how much a parent paid a few years earlier, they may understandably be reluctant to sell the property at a loss.

But holding out for a higher price can end up losing you even more money in the long run, because of the costs involved in keeping an empty property. An article in The Guardian in 2019 told how one man who had inherited his father’s retirement flat in Kent, which was bought for £161,950 in 2007, had failed to find a buyer even after reducing the asking price to £59,000. The seller blamed the high annual charges for putting off buyers: an annual service charge of more than £6,000, plus ground rent of £415 a year.

Even if there is nobody living in the property and benefiting from services, the owner is still liable to pay them – as well as council tax, which can be even more expensive for a vacant property. The “empty homes premium” allows councils to double the council tax on properties when they have been unused for two years, and treble it after five years. If a property is left empty for 10 years, the council tax rises to four times the normal rate. There is a dispensation for properties that are on the market, but this only extends to one year.

While there are specialist companies such as Girlings who offer to let out retirement properties, it is clear that such properties left empty can quickly end up costing their owners large sums of money, so in most cases it is vital to find a buyer as soon as possible.

How to find a buyer

Get a realistic valuation

Search for sold listings in the area (and where possible within the same development) to get a good idea of what price is achievable. Take the cost of keeping a property unsold into account when setting your asking price: service charges can quickly mount up. It’s better to name a lower figure from the outset and secure a faster sale rather than risk being trapped into paying thousands of pounds a year on an empty property.
You should also consider factors that will affect the value or saleability:

Retirement properties require a different selling approach from typical homes, so your marketing strategy should reflect this.

If you don’t get results, refine your approach. Ask agents to report back on why the property has failed to sell. Consider reducing the price or, if a quick sale is especially important, choosing a fresh approach such as auction.

We list you with both the top-performing local agent in retirement homes and a specialist agency, ensuring you get maximum coverage in one simple contract.

As well as outperforming traditional agents, our sales process makes things simpler for sellers. You sign terms and conditions, electronically, with us once only. We then negotiate with the estate agents to achieve the best terms, so that the listing can easily be moved from one agent to another if a sale is not achieved, at no additional cost. We will find the local agent who has been most active in retirement homes and list you with both them and one of the specialist agencies, maximising your universe of buyers.  Fees are due only on completion of a sale and there are no hidden charges.

Your Movewise advisor provides a single point of contact throughout the process, driving the sale forward, saving you time and paperwork and providing expert opinion on the best course of action at every stage.

We will also arrange a cleaning service to ensure that the property is presented in the best state, and can assist with other services such as key management, vacant property insurance and house clearance. We can also help provide bridging loans to cover short-term costs.

Finally, if you need to sell the property in the fastest possible time, we also offer an auction option. See our guide to selling a property at auction.

Kitty Cavendish is our specialist advisor on retirement homes and can be contacted at sales@movewise.co.uk or 020 3409 4350.