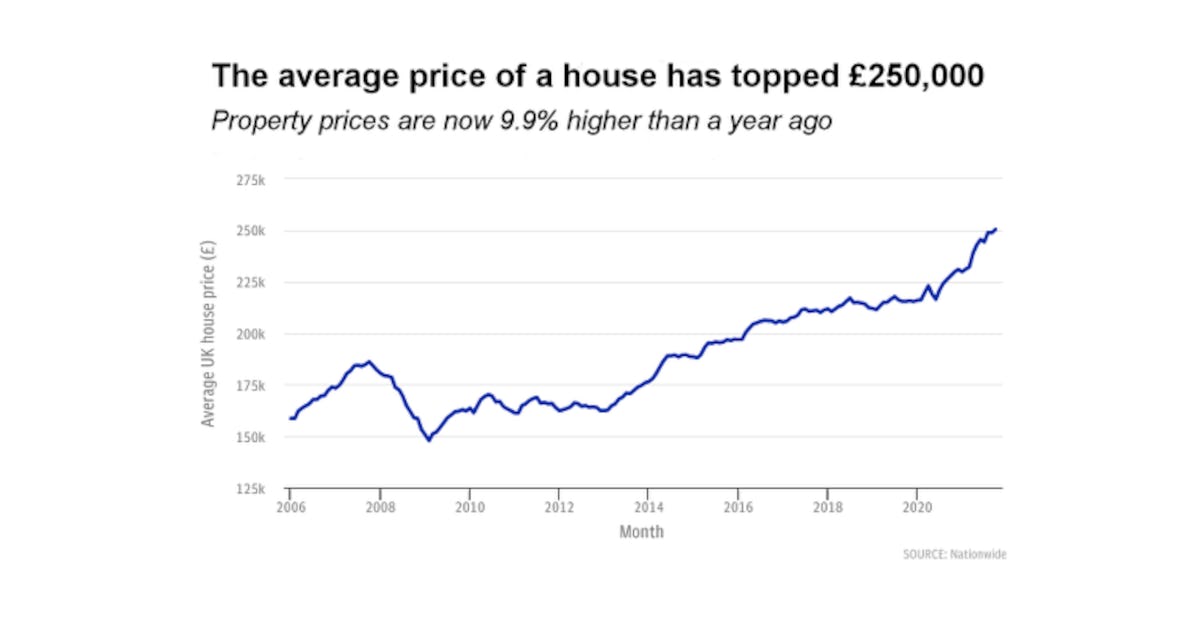 Last week, the Nationwide building society reported that the average home in the UK has now costs more than a quarter of a million pounds. This milestone means that prices have risen by almost 10% in a year, and by more than £30,000 since the start of the Covid-19 pandemic. Prices have been buoyed up by a surge of demand, with changing lifestyles including working from home meaning buyers are reassessing their priorities and looking for more space.

The market is predicted to cool off somewhat next year, with the Office for Budget Responsibility (the government’s official forecaster) suggesting prices will rise by 3.2%, and by just 0.9% in 2023.

Speculation over an increase in the base interest rate was put on hold when the Bank of England announced last week that the rate would stay at 0.1%. However, this hasn’t stopped some lenders putting their rates up – Natwest, Nationwide and HSBC all increased their fixed rates on Thursday. An increase in the Bank rate is widely expected to come sooner rather than later, but estate agents we’ve spoken to say they are not seeing much sign of worries affecting the market.

There was nothing earth-shattering for the property industry in Rishi Sunak’s October budget. The Chancellor made no mention of any further extension to the stamp duty holiday, which was finally phased out on 30 September, but sharp-eyed observers did spot a reference in government paperwork to the additional stamp duty on second homes and buy-to-lets being raised from 3% to 4%. In fact, no such increase was announced, suggesting a last-minute change of heart that escaped deletion.

Sunak also announced £5bn will be allocated for the removal of unsafe cladding on residential buildings, which will be partly funded through a tax on residential property developers. For more information on how to sell a property affected by the cladding crisis, read our guide or watch our recent webinar.

Our property team report that some sales are taking longer than usual to go through because solicitors “seem to be really slow to respond, possibly due to half term”. We have also seen a number of sales where lenders are being extremely slow to confirm release of funds for completion (in some cases three weeks or more).

However, we are still seeing plenty of very keen buyers out there, and the lack of stock continues, especially for houses outside cities.

Our head of property, Kirsty Burnham, also reports a great example of the importance of a proactive agent who builds trust with their buyers: “The property in question had been on the market for four weeks, with very few viewings and only one very low offer. We instructed a second agent and on day 2 of marketing, they have introduced a buyer who is likely to offer. This buyer had missed out on a similar property through the second agent before. They could have found the property online, but didn’t, and might even have been registered with the first agent, but clearly hadn’t been contacted by them.”

Once again, listing with a new agent who is prepared to spend some time going through their contacts book pays off. Just another reason Movewise’s managed multi-agent approach is the best way to sell.

A new writer for our newsletter

This is the 63rd Movewise newsletter, and up to now our founder and CEO, Tom Scarborough, has been sending them out. Now that’s changing, and I’d like to introduce myself. My name is Rob Kingston and I’ve been working with Movewise since last year, writing most of the articles and guides on a wide range of property topics that you can find on our website. I’ll be taking over the newsletter with the latest market updates every fortnight. If there’s a topic you’d like me to cover, either in the newsletter or in one of our web articles, please get in touch at robk@movewise.co.uk.

Have a great week.