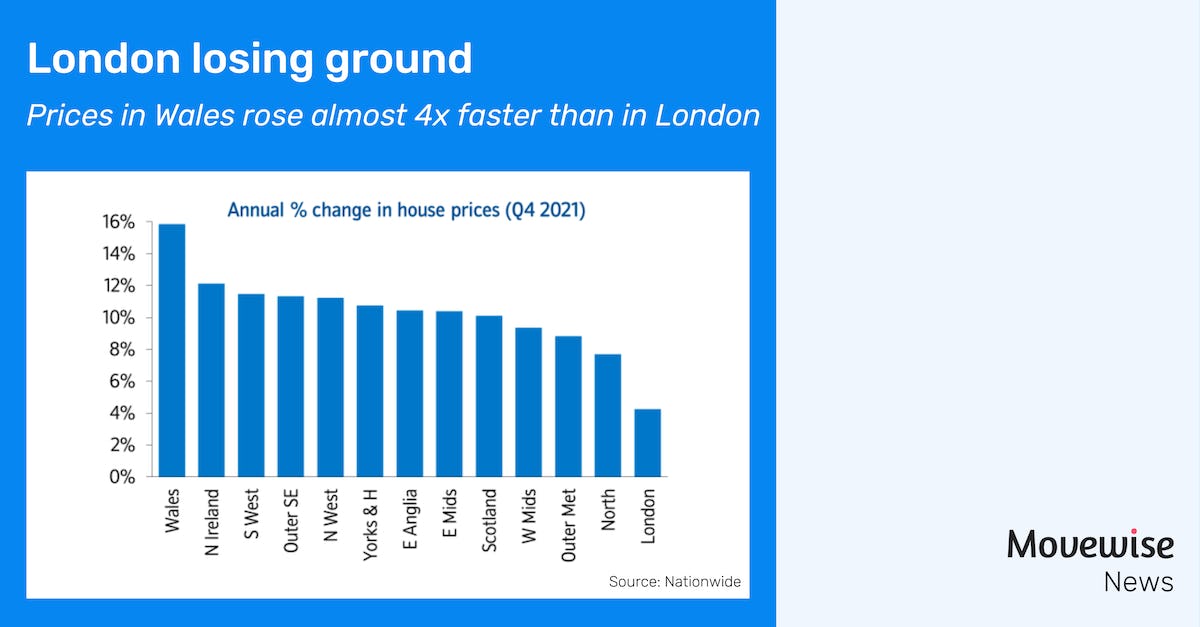 The latest Nationwide house price index shows that the average house in the UK ended 2021 worth £254,822 – an increase of £23,902, or almost £2,000 a month. Putting that in perspective, someone earning the national living wage of £8.91 an hour and working a 35-hour week would only be earning £1,351 per month before deductions. With the market showing few signs of slowing just yet, getting a foot on the property ladder is looking harder than ever.

Not every part of the country has seen prices soar, however. The Nationwide figures also highlight a growing trend for London property to be left behind by desirable areas further afield. The biggest increase in house prices was in Wales (up 15.8% year on year), while the largest rise among English regions was in the South West (up 11.5%). Separate data from the Halifax bank show that on a more local scale, Taunton in Somerset saw the biggest percentage rise, with prices up 21.8% to £315,759. Another West Country hotspot, Chippenham in Wiltshire, saw the biggest rise in absolute terms, gaining £58,322 (18.1%) in 12 months to £381,181.

London was the poorest performer by some distance, as the trend for home working made city life less appealing. The Nationwide index showed London prices rose just 4.2% in 2021, less than the 6.2% rise in 2020, while Halifax actually reported a slight fall in the Greater London market, of 0.6%.

Is the "Boxing Day bump" a myth?

In the last newsletter of 2021, I mentioned that the much-remarked-on rise in property searches on Boxing Day may not be all it's cracked up to be. Certainly the data seen by our property team suggests that the effect is small, and the real rise comes around now, in the first half of January. As soon as we have more data we will update our article on the best time to sell a property but for now our advice remains that if you are thinking of selling, or are stuck with an unsold property, now is the time to act! Our property experts would love to hear from you.

There was good news for people living in flats affected by the post-Grenfell cladding crisis yesterday, as housing secretary Michael Gove unveiled plans to make developers cover the estimated £4 billion of fixing defective cladding, meaning that leaseholders in buildings taller than 11 metres should no longer have to pay. Although campaigners welcomed this move, they say it does not go far enough, and fails to address other safety issues not directly related to cladding. Additionally, it is unclear whether Gove actually has the authority to implement his threat of higher taxes on developers if negotiations fail.

We recently addressed the cladding crisis in our series of problem property guides: read the article and watch our webinar to see what you can do if you want to sell an affected flat.

Did you know that Movewise doesn't just handle property sales? We can also arrange a full range of ancillary property services, such as house clearance, inventories, deep cleaning, keyholding and more. For sellers of multiple properties who want a one-stop shop for all these services, we have exciting plans for the coming weeks. Watch this space for details, but in the meantime you can call our property team for more information.

if there’s a topic you’d like me to cover in the coming year, either in the newsletter or in one of our web articles, please get in touch at robk@movewise.co.uk.